Over the past several months, Blackrock’s geologic team has been reviewing the historic underground mining maps and assay data and consolidating the information in GIS and Leapfrog software. The data compilation is assisting in the selection and prioritization of drill targets. The Company is pleased to outline an initial drill campaign totalling 7,035 metres of drilling in 17 reverse circulation drillholes contemplated to commence in June.

Andrew Pollard, President & CEO stated “It’s truly amazing to me that right in the heart of the “Silver State” of Nevada, that one of the largest historic silver endowments in North America has been hiding in plain sight, largely untouched by modern exploration for the better part of 80 years. Due to the prolonged fractured nature of the claims that makeup what was known as the “Queen of the Silver Camps”, one of the most significant high-grade mining districts in Nevada has been completely overlooked for decades. Our initial program is targeting low-hanging exploration fruit, picking up right where past miners left off, with well-defined veins that were up to 24m thick when operations ceased. We’ve outlined a large program as all of the targets we’ve compiled are priority and as we’ll be using RC drilling, we’ll be able to work quickly and cost effectively as we aim to bring attention back to this storied district.”

Four broad target areas have been defined which have the potential ranging from 2.5 million to 6 million tonnes with an average grade ranging from 13 to 21 g/t gold and gold equivalent. The potential quantities and grades of the target zones set out below are conceptual in nature, there has been insufficient exploration to define a mineral resource and it is uncertain whether further exploration will result in the targets being delineated as mineral resources. The target zones are as follows: 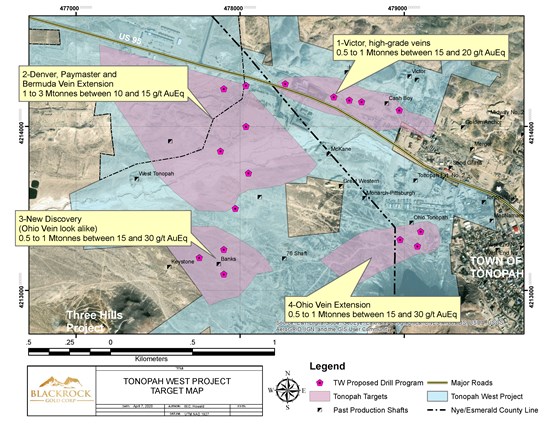 Because the bulk of the land holdings are comprised of patented lands, no drill permitting is required for disturbance less than 5 acres.

Forward Looking Statements
This news release contains “forward-looking statements” within the meaning of Canadian securities legislation. Such forward-looking statements concern the Company’s strategic plans, completion and exercise of the Tonopah option agreement, timing and expectations for the Company’s exploration and drilling programs, estimates of mineralization from drilling, geological information projected from sampling results and the potential quantities and grades of the target zones. Such forward-looking statements or information are based on a number of assumptions, which may prove to be incorrect. Assumptions have been made regarding, among other things: conditions in general economic and financial markets; accuracy of assay results; geological interpretations from drilling results, timing and amount of capital expenditures; performance of available laboratory and other related services; future operating costs; and the historical basis for current estimates of potential quantities and grades of target zones. The actual results could differ materially from those anticipated in these forward-looking statements as a result of the risk factors including: the ability of the Company to complete the Tonopah lease option, the timing and content of work programs; results of exploration activities and development of mineral properties; the interpretation and undertainties of drilling results and other geological data; receipt, maintenance and security of permits and mineral property titles; environmental and other regulatory risks; project costs overruns or unanticipated costs and expenses; availability of funds; failure to delineate potential quantities and grades of the target zones based on historical data, and general market and industry conditions. Forward-looking statements are based on the expectations and opinions of the Company’s management on the date the statements are made. The assumptions used in the preparation of such statements, although considered reasonable at the time of preparation, may prove to be imprecise and, as such, readers are cautioned not to place undue reliance on these forward-looking statements, which speak only as of the date the statements were made. The Company undertakes no obligation to update or revise any forward-looking statements included in this news release if these beliefs, estimates and opinions or other circumstances should change, except as otherwise required by applicable law.

To view the source version of this press release, please visit https://www.newsfilecorp.com/release/54872