The 2020 drill program at Northwest Canyon is designed to encounter the mineralized structure at depth (SBC20-006) and expand along strike to the west. Drillhole SBC20-006, completed to 678 metres, tested the down-dip extension of the east-west gold mineralized zone, and from a vertical extent, is the deepest drillhole completed on the Silver Cloud property to date. Drilling of the second hole has been postponed due to the coronavirus outbreak, and the Company will resume exploration work later in the year as conditions permit.

In the fall of 2019, the Company completed five HQ core holes totalling 2,207 metres (7,240 feet) at the Silver Cloud mercury mine and Northwest Canyon target. Geologic interpretation and assay results indicated a potential east-west vein system at Northwest Canyon, where three drillholes (SBC19-002, SBC19-003 and SCP-15) define a 250-metre long mineralized zone. In drillholes SBC19-002 and -003, downhole geophysical survey (acoustic televiewer) showed east-west oriented veins and fractures in the mineralized zones. The mineralized structure is steeply dipping to the south and has a drill-defined strike length of 250 metres.

SBC20-006, a vertical hole drilled from the same pad as -002 and -003, intersected several significant alteration zones. Most of the alteration zones were between 1.5 and 3 metres thick; however, below 335 metres, four zones were greater than 3.5 metres and one zone exhibited sulfide breccia veins and quartz veinlets over 18 metres. Detailed logging and sample selection is in progress, and sample intervals are being cut and delivered for gold and silver assay.

Andrew Pollard, President & CEO, commented, “An understanding of what the epithermal system looks like at depth is a crucial step towards unlocking the potential at Silver Cloud. Having completed the deepest drillhole yet on the entire property has expanded our understanding of the Northwest Canyon area greatly. In addition, not only did the drill confirm that the basement is down dropped between the Silver Cloud mine and Northwest Canyon into a newly-identified graben feature, the drillhole also encountered four zones of alteration, including one in particular that was laden with quartz veinlets and sooty sulfides over 18 metres width. This the first time sulfides of significant thickness have been encountered in this target area.

With the enhanced property-wide gravity survey in hand, in addition to what we’ve witnessed in the drillhole, we believe that a graben-like structure cuts right across our property forming a very prospective structural and geologic domain. This corridor extends from the northwestern section of our property, where Newmont encountered gold mineralization in the 1980’s at the Quiver target, and extends down and across the western half of the property, engulfing Northwest Canyon. We are very excited by this new revelation.”

SBC20-006 confirmed the volcanic units at Northwest Canyon are thicker and more complex than the volcanic lithologies encountered at the Silver Cloud mine. SBC20-006 drilled through a thick sequence of basaltic andesite flows and tuffs along with basaltic flows. The dense mafic flows and tuffs explain the higher gravity readings (magenta, red and orange colours) on the western half of the Silver Cloud project. SBC20-006 did not encountered the Paleozoic basement.

The thick sequence of mafic units appear to lie within a down-dropped structure (Silver Cloud graben) that runs northward on the south end of the project area and turns northwestward roughly in the centre of the project area. The graben is interpreted as an extension or parallel feature of the Midas Graben located at the Midas mine 15 kilometres to the north, the largest mine on the Northern Nevada Rift. The significance of the graben is in the increased thickness of volcanic material and the structural architecture it provides for localized gold deposits. The graben is syn-volcanic as some volcanic units cross the graben margin. This is significant since the epithermal system appears to have been active at the time the Silver Cloud graben was forming. 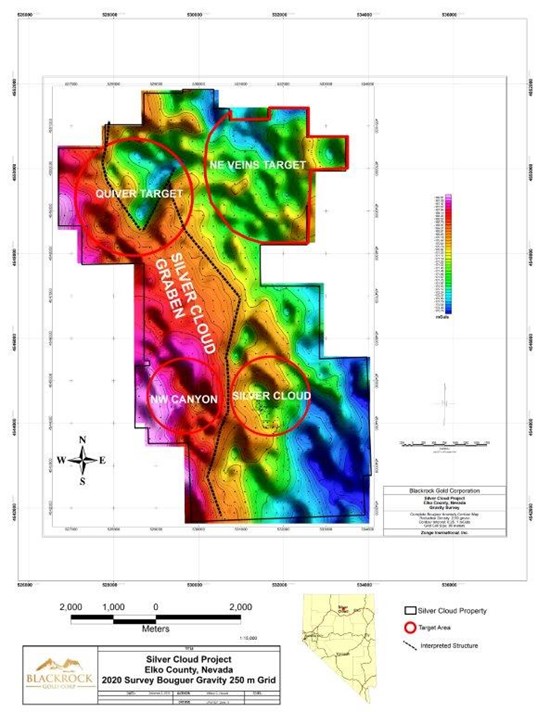 Andrew Pollard further commented, “ As we await assays that will help to guide an expanded contemplated program in this area, and in light of doing our part to ensure our employees and consultants stay safe, we have decided to suspend our program temporarily due to COVID-19 considerations until it is considered safe for our employees and contractors to resume operations.”

Blackrock’s exploration activities at the Silver Cloud Project are being conducted and supervised by Mr. William Howald, Executive Chairman of Blackrock Gold Corp. Mr. William Howald, AIPG Certified Professional Geologist #11041, is a Qualified Person as defined under National Instrument 43-101. He has reviewed and approved the contents of this news release.

Blackrock is a junior gold-focused exploration company that is on a quest to make an economic discovery. Anchored by a seasoned Board, the Company is focused on its Nevada portfolio consisting of low-sulfidation epithermal gold & silver projects located along on the established Northern Nevada Rift in north-central Nevada, and the Walker Lane trend in western Nevada.

This news release contains “forward-looking statements” within the meaning of Canadian securities legislation. Such forward-looking statements concern the Company’s strategic plans, timing and expectations for the Company’s exploration and drilling programs, estimates of mineralization from drilling, geological information projected from sampling results and the potential quantities and grades of the target zones. Such forward-looking statements or information are based on a number of assumptions regarding, among other things: conditions in general economic and financial markets; accuracy of assay results; geological interpretations from drilling results, timing and amount of capital expenditures; performance of available laboratory and other related services; future operating costs; and the historical basis for current estimates of potential quantities and grades of target zones. The actual results could differ materially from those anticipated in these forward-looking statements as a result of the risk factors including: the timing and content of work programs; results of exploration activities and development of mineral properties; the interpretation and uncertainties of drilling results and other geological data; receipt, maintenance and security of permits and mineral property titles; environmental and other regulatory risks; project costs overruns or unanticipated costs and expenses; availability of funds; failure to delineate potential quantities and grades of the target zones based on historical data, and general market and industry conditions. Forward-looking statements are based on the expectations and opinions of the Company’s management on the date the statements are made. The assumptions used in the preparation of such statements, although considered reasonable at the time of preparation, may prove to be imprecise and, as such, readers are cautioned not to place undue reliance on these forward-looking statements. The Company undertakes no obligation to update or revise any forward-looking statements included in this news release if these beliefs, estimates and opinions or other circumstances should change, except as otherwise required by applicable law.

To view the source version of this press release, please visit https://www.newsfilecorp.com/release/54023