Vancouver, British Columbia–(Newsfile Corp. – October 24, 2019) – Blackrock Gold Corp. (TSXV: BRC) (the “Company“) is pleased to provide an update on the diamond drilling program currently being conducted at the Silver Cloud project located in Elko County, Nevada. Highlights are as follows:

William Howald, Executive Chairman of Blackrock, stated, “The first hole drilled at Silver Cloud in over 15 years has intercepted an intensely silicified interval with up to 10% sulphide in a strongly altered porphyry intrusive. Placer Dome previously intersected high-grade gold, including 1.5 metres grading 12.5 g/t gold, from a similar altered porphyry unit at the Northwest Canyon Target located 1.5 kilometres to the west. Hole SBC19-002 is currently being drilled in this area. Naturally, this is a very encouraging result and supports our view that a high-grade gold deposit may exist at depth at Silver Cloud. We look forward to the drill results from Hole SBC19-001 as we continue to make good progress towards completing the additional three holes that are planned as part of this drill campaign.”

Drilling at the Silver Cloud Mine area commenced on October 5, 2019, with core hole SBC19-001 (see Figure 1) and was completed to 470 m on October 15. This hole intercepted the predicted geologic lithologies to 124 m at which point a sanidine-rich felsic, high-level porphyritic intrusive was encountered.

From 300m to 318m, the pervasively silicified felsic porphyry transitioned into a silicified breccia body with a sooty sulphide matrix. Although a similar intrusive porphyry breccia was found at Northwest Canyon in Placer Dome’s drillhole SCP-015 (12.2 m grading 5.53 g/t Au, including 1.5 m grading 12.5 g/t Au), the porphyry was not expected at the Silver Cloud mine locale.

From 318m to 325 m, the siliceous clast breccia matrix was overprinted by a secondary sulphide event depositing 10% sulphide (see Figure 2) along a steeply dipping fault zone. The drill passed out of the altered porphyry at 325m back into rhyolite and through the remaining rhyolite and tuff volcanic units. At 454m, the drill intersected the Ordovician basement lithologies which was predicted to be at 457m, and the hole was terminated at 470m.

Drill core from SBC19-001 is being logged, photographed, cut and prepared for shipment to American Assay Laboratories in Reno, Nevada. Assays are pending. Thus far, drilling and mud costs have come in 30% under budget. Following completion of the hole, downhole geophysics were employed to further aid in mapping of the structural orientation of the system.

Blackrock commenced SBC19-002 on October 16, 2019. This hole is designed to follow up the high-grade Placer Dome intercept and is positioned to test the newly recognized east-west oriented vein system. This orientation is similar to vein style mineralization at the nearby Hollister mine. SBC19-002 is located 1.5 km west of SBC19-001. 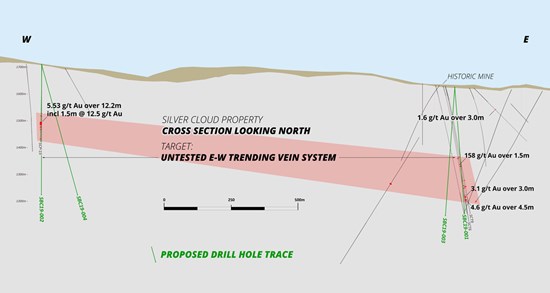 The fully-financed initial program will consist of 2,000m of core drilling, with four holes planned to follow up on past high-grade intercepts reported by Teck (including 158g/t Au over 1.5m) and by Placer Dome (5.53g/t Au over 12.2m).

Blackrock is a junior gold-focused exploration company that is on a quest to make an economic discovery. Anchored by a seasoned Board, the Company is focused on its Silver Cloud property, a low-sulphidation epithermal gold & silver project located along the established Northern Nevada Rift gold trend in north-central Nevada. A fully-financed 2,000m core drilling program has commenced and is ongoing at Silver Cloud, with four holes planned to follow up on past high-grade intercepts reported by Teck and Placer Dome.

To view the source version of this press release, please visit https://www.newsfilecorp.com/release/49086