The Company has completed detailed mapping and received assay and geochemical determination from an additional 342 soil samples collected on the northeastern portion of the Silver Cloud project on the Northeast Veins Target. The soil survey confirms and expands the previously announced soil anomaly (See July 29, 2019, news release). The 30mX100m, north-south oriented grid lines were designed to accentuate the east-west oriented alteration zones identified in the NE Veins Target.

On Humdinger Ridge and Honey Hill, several outcropping veins have been identified and mapped. The veins cut Miocene-age volcanic rocks which lie immediately above the Ordovician Upper Plate sediments. The geologic setting is significant since the Hollister mine lies just 3 kilometres east of the target area and has similar geology. Six opal/chalcedony veins have been identified on Humdinger Ridge. The veins are purple, a result of cinnabar and hematite minerals, and strike northerly, northwesterly to northeasterly, dip steeply and vary from less than 0.5 metres to greater than 5 metres in thickness. These veins occur over a one square kilometer area. Approximately 400 metres north of Humdinger Ridge, mapping at Honey Hill has identified two similar veins that are oriented in a west-northwest direction. All veins lie within an east-northeast oriented structural and alteration corridor that is 1200 metres long and 575 metres wide. The structural zone is open to the east and west.

The soil survey returned low-level gold (up to 0.025 ppm) and sporadic detectable silver. These elements are not typically found in the upper levels of a low-sulphidation epithermal vein system. Based on the Hollister model, the bonanza gold and silver grades should be 250 to 300 metres below the surface within an east-west oriented vein swarm.

Arsenic and mercury show east-west and northeast trends on Humdinger Ridge, Honey Hill and immediately south of the Surprise mercury prospect The arsenic anomaly has expanded from 1000m by 600m to 1300m by 700m and is still open to the east and northeast toward Hecla’s Hollister mine. Arsenic values between 23 ppm and 78 ppm form the anomaly. Mercury follows northeast, northwest and east-west structures over Humdinger Ridge and Honey Hill. There is a broad mercury anomaly, 200m by 350m, located south of the Surprise mercury prospect with values between 2 ppm and 15 ppm mercury. The anomaly is open to the north and northeast.

Andrew Pollard, CEO stated, “With a total of 8 veins now identified at surface, an expanding and open geochemical anomaly that sits atop gravity lows, and just 3km directly to the east of Hecla’s nearby Hollister mine, the previously unexplored NE Veins target is shaping up to be a significant exploration play.” He adds, “It’s truly amazing that a project that sits surrounded by some of the largest and highest-grade gold mines in the world, in a tier-one jurisdiction, and previously explored by the likes of Teck and Placer Dome, can deliver such a compelling, and untested target with surface expressions like this. It’s hard to comprehend how this project has sat undrilled over the past 15 years, but therein lies the opportunity for us. Management is contemplating a phase two drill program targeting the NE Veins target, likely with some overlap of the upcoming 2000m program that is to follow up on the past high-grade intercepts of both Teck(158g/t Au over 1.5m) and Placer Dome(12m of 5.5 g/t Au). We are excited to finally bring drilling back to Silver Cloud.” 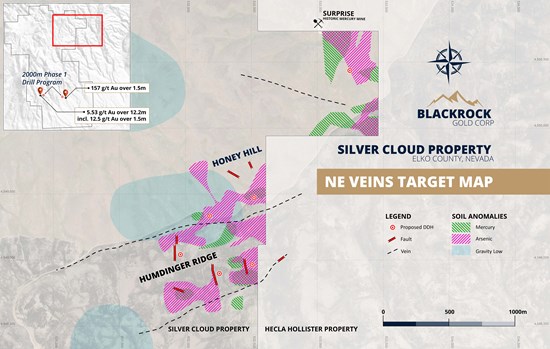 Drill pads are complete, and the drill program is anticipated to start by the end of September. The drill is currently working at the Hollister mine and will be moved to Silver Cloud as soon as that job is finished.

Blackrock is a junior gold-focused exploration company that is on a quest to make an economic discovery. Anchored by a seasoned Board, the Company is focused on their Silver Cloud property, a low-sulphidation epithermal gold & silver project, located along on the established Northern Nevada Rift gold trend in north-central Nevada.

To view the source version of this press release, please visit https://www.newsfilecorp.com/release/48009