As Japan continues restarting nuclear power plants it shuttered in the aftermath of Fukushima the forecast is for 19 reactors to be restarted by March 2018. The combination of restarts in Japan and new reactors coming online in China (21) and India (6) over the next few years is set to result in a significant uranium supply shortfall by 2025: 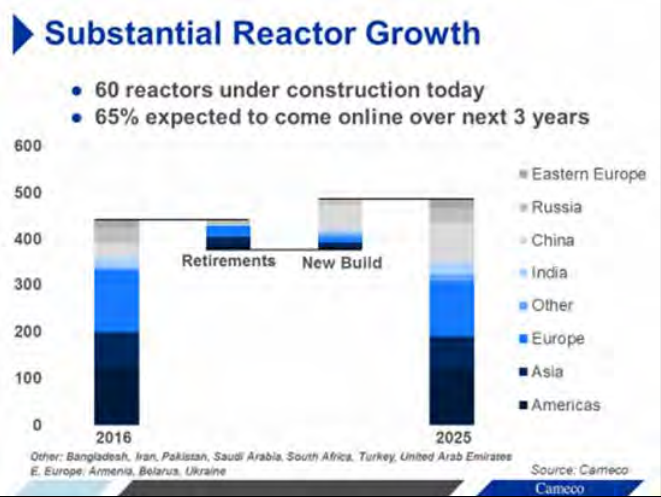 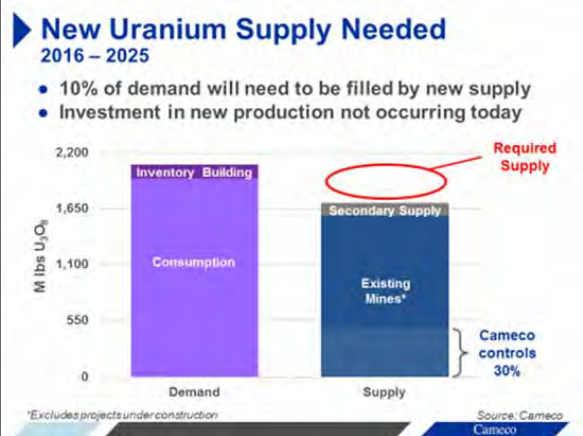 Another potential source of upside demand relative to current market expectations over the coming years could come in the form of European reactors remaining in service instead of getting shut down as a result of a knee jerk reaction to the Fukushima disaster.

There are few uranium explorers in a position to meet this shortfall with uranium production that is ready to come online as fresh demand emerges from new reactors.

Three junior uranium explorers stand out (GoviEx, Berkeley, and Toro) as the cream of the crop in terms of having large uranium resources and a relatively fast track to production. GoviEx (TSX-V:GXU) is potentially the most interesting company of this group due to its 75% discount to its peer group and the fact that it has two mining permits in hand, one at its Madaouela Project in Niger and one at its Mutanga Project in Zambia.

GoviEx is the little giant in the uranium space. Little, because its market cap is still under $40 million. Giant because its resource base is one the largest of any publicly traded uranium explorer or producer in the world. 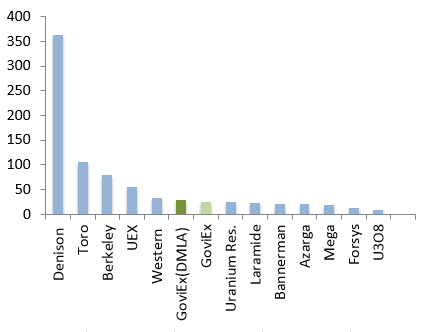 At almost 200 million pounds of uranium in the ground it is nearly double the size of many better known names in the space.

GoviEx is a giant in another way. It has a shareholder register that reads like a Who’s Who of the industry: roughly 60% of its shares rest in the hands of Denison, Cameco, Ivanhoe, Toshiba, and its Chairman, Govind Friedland.

With permits already in hand at Madaouela and over 60 million pounds in high grade U3O8 reserves there, GoviEx is beginning with the structuring of financing the debt portion of the project financing required for the development of that project. GoviEx anticipates utilizing Export Credit Agencies (ECAs) as part of a four-part strategy developed by GoviEx to advance the project to production:

ECAs look to be a key component of financing Madaouela given their ability to provide credit insurance, which significantly reduces the risk profile of project debt, and while many commercial lenders are currently showing little interest in financing mining projects, they are interested in ECA backed projects. This is approximately an 18-24 month process – we expect the company to present a structured finance package when completed late in 2017, including debt, and long term off-take, with production due late 2020.

As GoviEx moves forward to the project financing and construction phases at Madaouela, the company is also advancing its mine permitted Mutanga resource in Zambia and preliminary work has begun to rework the economics of that project, and we believe initial findings at Mutanga are likely to be promising.

Increasingly it is becoming clearer that Nuclear power has to be part of a balanced energy portfolio for most countries, especially with the ever increasing focus on clean energy, and in fact, there is a good chance that demand over the coming decades could surpass expectations. GoviEx is positioning itself to help meet the growing supply/demand gap forecast out past 2020 and the company is making the right strides in moving its large scale African uranium projects to production.

Completing the debt portion of the Madaouela Project financing and proving up some of the resources at Mutanga could go a long way toward bridging the sizable valuation gap that GXU shares currently experiences.

The next few months should bring significant news flow to investors as results from Mutanga are shared with the market, and GoviEx selects the ECAs, which it will work with to construct the Madaouela Project and bring the mine into production. Look for GoviEx CEO Daniel Major’s presentation at the Subscriber Investment Summit in Vancouver on October 11th in Vancouver. CEO.CA and Energy and Gold will be at the summit updating investors on GoviEx’s plans as well as providing any updates on the company’s African uranium assets.

The article is for informational purposes only and is neither a solicitation for the purchase of securities nor an offer of securities. Readers of the article are expressly cautioned to seek the advice of a registered investment advisor and other professional advisors, as applicable, regarding the appropriateness of investing in any securities or any investment strategies, including those discussed above. GoviEx Uranium (TSX-V:GXU) is a high-risk venture stock and not suitable for most investors.. Consult GoviEx Uranium’s SEDAR profile for important risk disclosures.