VANCOUVER, BC, Aug. 10, 2020 /CNW/ – Summa Silver Corp. (“Summa Silver” or the “Company”) (CSE: SSVR) (Frankfurt: 48X) is pleased to announce that Michael Konnert has been appointed to the Board of Directors. In addition, a second core drilling rig has recently been mobilized to site and is now drilling high priority targets on the project as part of the ongoing 7,500 m program.

Galen McNamara, CEO, stated: “We are delighted to have Michael join the Company’s Board. He is a seasoned mining industry executive, whose strategic vision and experience will be very valuable as we aggressively push forward with our ongoing fully financed 7,500 m drill program at the Hughes property in Tonopah, Nevada. The district has seen increased interest with the high-grade discovery only 300m west of our project. We are currently evaluating the possibility of expanding the program so we can drill potential strike-extensions to that mineralization.”

Michael Konnert, incoming Director, added: “I am very grateful to join the board of Summa Silver. Galen and his team have done excellent work in securing the eastern portion of the exciting historic Tonopah silver camp. I am pleased to join the company and help advance Summa’s vision of building a high-grade silver company.”

Three broad areas will be drilled in the vicinity of the Belmont Mine. Each hole will target strike and/or dip extensions of known veins. Importantly, historic underground development on many of the veins was stopped at shallow levels well above the elevation of greatest dilation in the Belmont Vein, which was up to 15m wide before it was mined. In addition, the tightly stacked nature of the veins in the mine area means that many of the holes will test multiple targets along their planned lengths.

At least two holes will be collared in this area to follow-up on hole ET-7, which approximately 1,000 m further east from the Mizpah Extension Mine workings is reported to have intersected silver and gold mineralization. Of important note, ET-7 was drilled as a vertical hole. Three-dimensional modeling shows that the most prospective veins on the Property are steeply oriented or near vertical and therefore not appropriately tested with vertical drill holes.

Mr. Konnert is Chief Executive Officer and founder of Vizsla Resources Corp., currently exploring the Panuco district in Mexico where recent drilling has returned high-grade silver and gold results in the Napoleon vein corridor. He is also co-founder and Partner of Inventa Capital Corp., a private natural resource investment company based in Vancouver, BC. Previously, he was co-founder and CEO of Cobalt One Energy Corp., which was acquired by Blackstone Minerals Ltd. in 2017. Michael has nearly a decade of experience in the natural resources industry, specifically in executing successful corporate strategies for mineral exploration companies.

Additionally, Hani Zabaneh has resigned from the Board of Directors. The Company would like to thank Mr. Zabaneh for his contributions and wish him well in his future endeavours.

The technical content of this news release has been reviewed and approved by Galen McNamara, P. Geo., the CEO of the Company and a qualified person as defined by National Instrument 43-101. The Qualified Person has not verified the data disclosed, including sampling, analytical and test data underlying the information or opinions contained in the written disclosure.

Summa Silver Corp is a Canadian junior mineral exploration company. The Company has the option to earn a 100% interest in the Hughes property located in central Nevada. The Hughes property is host to the high-grade past-producing Belmont Mine, one of the most prolific silver producers in the United States between 1903 and 1929. The mine has remained inactive since commercial production ceased in 1929 due to heavily depressed metal prices and little to no modern exploration work has ever been completed. 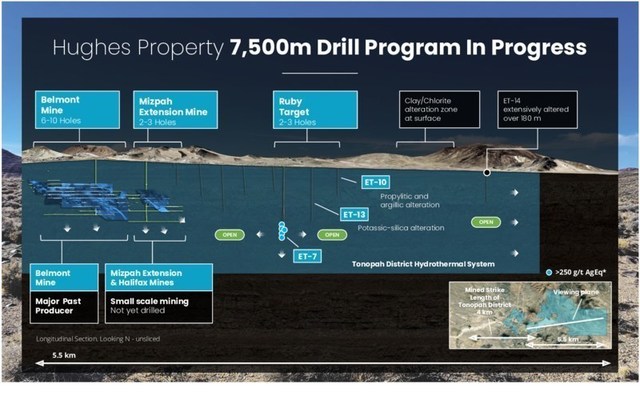