Victoria, British Columbia–(Newsfile Corp. – June 23, 2021) – GoldON Resources Ltd. (TSXV: GLD) (“GoldON” or the “Company”) is pleased to announce the start of fieldwork on its 100% owned McInnes Lake property (the “Property”) in Northwestern Ontario.

Located approximately 117 kilometres (km) north of Red Lake, the 11,424-hectare Property is 29 km long by up to 8.5 km and covers the majority of the McInnes Lake Greenstone Belt and unexplored Balmer Assemblage lithologies similar to those that host the Red Lake Gold Camp.

Figure 1: Location of McInnes Lake Property and GoldON’s other Projects (click to enlarge)

To view an enhanced version of Figure 1, please visit:
https://goldonresources.com/images/McInnes/McInnes-Lake-Regional.jpg

Orix Geoscience was engaged to compile and analyze historical data to create a 2D GIS compilation and geologically assess the Property for exploration targets of high merit and recommend an exploration strategy. Orix identified four prominent regional features through compilation and the interpretation of an Ontario Geological Survey (OGS) conducted airborne magnetic and VLF-EM survey in 2008. The initial fieldwork will consist of prospecting, mapping and lake sediment sampling focusing on these four core areas of the vastly underexplored claim package (see Figure 2). 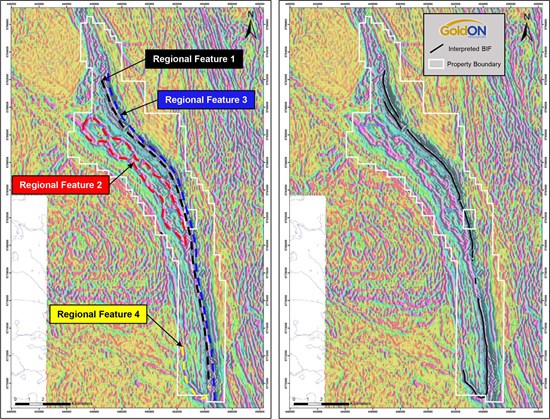 To view an enhanced version of Figures 2 and 3, please visit:
https://goldonresources.com/images/McInnes/Figures_2-3.jpg

The long linear high magnetic (MAG) feature (see Figure 3) on the east side of the Property and greenstone belt is a banded iron formation (BIF). This area has been intermittently mapped by OGS in 2007 and has been confirmed in drill core dating back to 1962. The BIF appears to be 4 to 20 metres (m) in true width from drilling, intercalated with greywacke, strongly magnetic and intermittently sulphide bearing containing pyrite and pyrrhotite with noted galena and chalcopyrite. Sulphides can be up to 50% by volume, confined to more iron-rich layers, or occur as disseminations or stringers. Importantly, no sampling or assaying accompanies the drill logs. 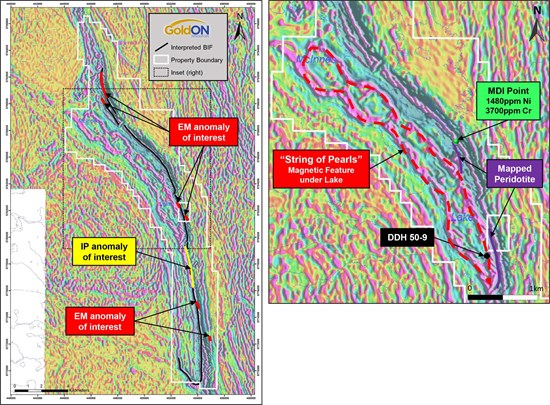 To view an enhanced version of Figures 4 and 5, please visit:
https://goldonresources.com/images/McInnes/Figures_4-5.jpg

A more detailed review of the historical assessment reports of the geophysical surveys conducted identified several anomalies along the McInnes BIF that warrant further investigation (see Figure 4). The 1989 and 1990 VLF-EM surveys by Placer Dome Inc. identified many anomalies that warrant follow-up exploration. Most of these anomalies share the feature of being strong crosscutting EM signatures not related to magnetics.

In the central portion of the Property, a prominent feature resembling a “string of pearls” is characterized by oblong-shaped bodies with high magnetic features around the edge centered on a lower magnetic signature (see Figure 5). This magnetic feature is almost entirely underwater however outcrops of ultra-mafic (peridotite) lithology have been noted along the eastern shore of McInnes Lake. Drill hole 50-9 intersected the eastern edge of the apparent ultra-mafic body reporting chlorite-talc schists with noted serpentine. These are common alteration products of ultra-mafic lithologies. Documented mineral showing “MDI53C04NE00005” reports a grab sample anomalous in Ni (1480 ppm), Cr (3700 ppm) and MgO of 28.7%, all suggesting an ultra-mafic host. Lamprophyre dykes were interested in the 1950 series drilling confirming deep magmatic sources (these are also quite common lithologies in gold deposit areas). The soft nature of ultra-mafic lithologies would create a topographic low during glaciation filled in by McInnes Lake.

Anomalous Ni-Cr ultra-mafic complexes suggest syn-tectonic magmatic derived layered ultra-mafic intrusions which are host to Ni-Cu-PGE disseminated to massive sulphide mineralization. In many mafic-ultramafic volcanic or intrusive systems, the magma rises to the lithosphere as a plume. As Ni has a moderate partition factor with olivine the Ni-Cu sulphide magma needs to reach the crust with minimum olivine fractionation and sulfide segregation. Faults and other associated structures are, therefore, important pathways for the magma to be emplaced or extruded rapidly. The ultra-mafic complexes also support the idea of a deep crustal fault or structure (E1) to be present in the McInnes Lake Greenstone Belt. Gold deposits of the Red Lake Mine Complex are hosted or intimately associated with Balmer Assemblage ultra-mafic lithologies.

A deep linear magnetic low is prominent along the eastern side of McInnes Lake (see Figure 6). Seismic interpretation from Zang and Calvert, 2006 suggests that a deep-seated extensional shear (E1) extends northward from the Red Lake Gold Complex for 75km along slivers of greenstone. The seismic survey ended at this point. The same continuation of greenstone slivers extends beyond this to McInnes Lake. The McInnes ultra-mafic layered complex was likely emplaced along a deep-seated structure. Schists noted in drill logs and mapped structures by the OGS in 2007 provide evidence that suggests a major deformation zone and possible splays pass through the McInnes Lake Greenstone Belt. 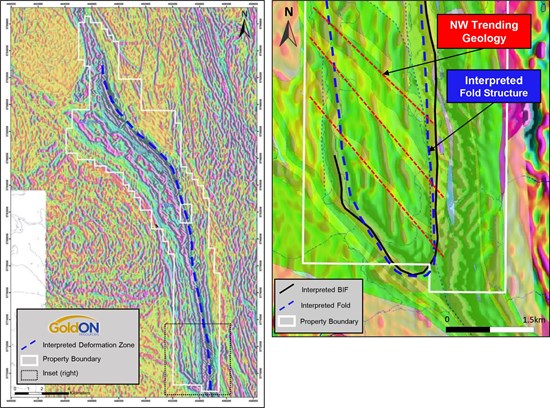 To view an enhanced version of Figures 6 and 7, please visit:
https://goldonresources.com/images/McInnes/Figures_6-7.jpg

A “fish-hook” shaped magnetic feature at the southern portion of McInnes Lake (see Figure 7) is augmented by a linear magnetic high feature that appears to be broadly folded. The airborne magnetic survey was completed the year after the OGS mapping program in 2007. Geologists from OGS mapped interflow mafic and intermediate volcanics in this area trending northwest-southeast, yet the underlying magnetic fabric trends north-south.

Based on the magnetic signature in this area of McInnes Lake, it is proposed that the stratigraphy is folded about a D2 structure; and the folded linear magnetic high represents a possible folded BIF (see Figure 8). This area is considered an area of high merit for the exploration of orogenic gold mineralization. Folded BIF-hosted gold deposits are host to the Musselwhite gold mine, the former Lupin gold mine, and the Dona Lake gold mine in Pickle Lake. 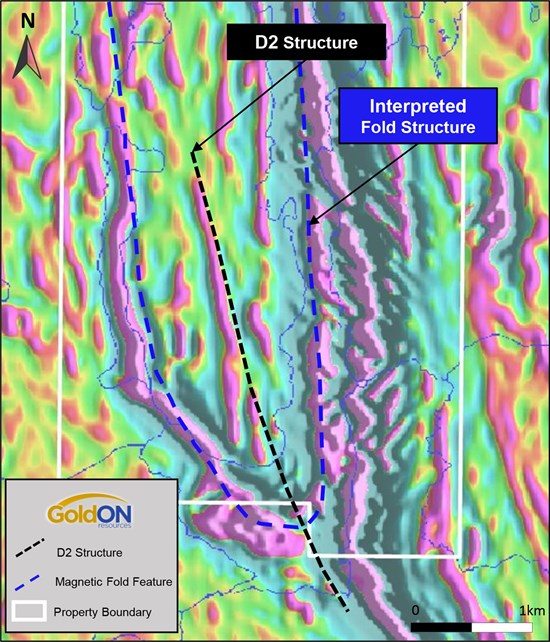 To view an enhanced version of Figure 8, please visit:
https://goldonresources.com/images/McInnes/Figure_8.jpg

Mike Kilbourne, P.Geo., an independent Qualified Person as defined in NI 43-101, has reviewed and approved the contents of this news release on behalf of the Company.

To view the source version of this press release, please visit https://www.newsfilecorp.com/release/88334