In 1857, the discovery of placer gold at the confluence of the Nicoamen and Thompson rivers sparked the Fraser River Gold Rush. This discovery drew tens of thousands of prospectors from California, Eastern Canada and as far away as Europe. This gold rush is largely credited as the catalyst for the founding of the colony that later would be named British Columbia.

These prospectors continued to chase gold further north leaving the Spences Bridge Gold Belt (SBGB) behind. Modern exploration only recently began, and in 2005 the first drill program on the SBGB returned a hole grading 20.2 grams/tonne gold over 12.8 meters (this hole confirmed the presence of high-grade epithermal gold mineralization in the SBGB).

During the 2011-2015 bear market period in the gold mining/exploration sector a company called Westhaven Ventures (TSX-V:WHN) used the downturn to assemble a highly prospective property package in this underexplored area of British Columbia. Westhaven founder & CEO Gren Thomas has made a career of making discoveries in places that others have overlooked, including the Diavik mine and the Thor Lake rare metals deposit in Canada’s Northwest Territories.

Westhaven has put together a 30,000 hectare land package consisting of 3 primary projects:

Shovelnose Gold Project: In late March, 2018 Westhaven initiated a drill program at the Shovelnose to follow up on the recent, significant discovery of a gold mineralized vein system.  Westhaven is planning to drill 2,000+ meters and test multiple high priority targets. Given that the property has demonstrated it has the potential to host high grade gold, the company is excited to have started this program and expecting results to be published over the upcoming months.

Shovelnose features an epithermal vein system hosted by volcanic and volcanic-hydrothermal units with syn-hydrothermal dike intrusions. There is evidence of a significant mineralized alteration system within the property where float samples grading 119 g/t gold (Au) and 273 g/t silver (Ag), veins in trenches grading 66 g/t Au, and drill intercepts of higher grade intervals including 16.7 g/t Au over 0.5 metres and 4.95 g/t Au over 0.6 metres have been encountered. Pictures of cores from drilling at Shovelnose

‘During the bear market downturn, Westhaven managed to scoop up two properties that have had ~C$15 million worth of exploration completed to date. They acquired these properties for literally pennies on the dollar for a grand total of C$140,000 cash and 3 million WHN shares. The two properties are the Skoonka gold and Prospect Valley gold properties.

Skoonka Creek Gold Property: Westhaven plans to begin a drill program at Skoonka by the end of June – this drill program will follow up on previous high grade (including 3.3 meters of 26.8 g/t gold and 28.8 g/t silver) drilling results at Skoonka and test the newly discovered (summer of 2017) JJ West Zone (13 drill targets/3000 meters). The aforementioned drill hole grading 20.2 grams gold over 12.8metres is at the Skoonka, too.

Prospect Valley Gold Property: With only limited drilling completed, there is a small 43-101 compliant resource estimate for Prospect Valley outlining 166,000 ounces gold grading 0.511 grams/tonne Au. However, there are some impressive historical intercepts including 45.7 meters grading 1.44 g/t gold and 8.2 g/t silver, which Westhaven is committed to following up on in future drill programs. 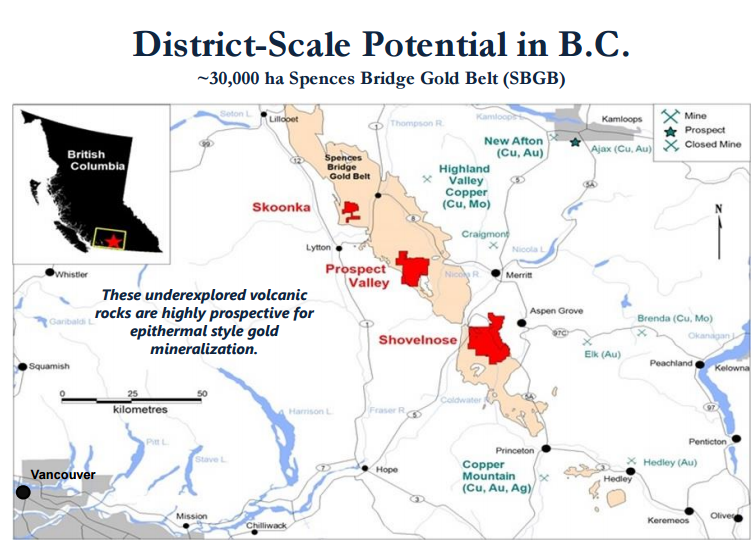 Westhaven is a unique story with enormous management and insider ownership (~40%). Gren Thomas (President and CEO, Westhaven Ventures) is the biggest shareholder, and a believer. Another aspect that sets Westhaven apart is the fact that all of its projects are near roads and other key infrastructure (rail, natural gas, and power lines) in southwest British Columbia. This reduces all-in drilling costs for Westhaven, and makes it cheaper and easier for the company to explore its properties. From a shareholders perspective, this means that the treasury lasts longer and translates into more drilling and less dilution. In addition, Westhaven can work practically year-round at its Shovelnose Project.

Westhaven has already outlined a sizable gold mineralized system at the Shovelnose Project, and the Company is optimistic that it can find the high-grade feeder system – this is the objective of the drill program currently underway at Shovelnose. Westhaven truly believes that every hole it drills has the potential to be THE glory hole that demonstrates both economic grade and width.

Westhaven wants to find gold feeder zones/structures/systems that are the source for much of the gold found in the surrounding area, including the placer gold which sparked the Fraser River Gold Rush. These are structures/fractures etc, that the gold mineralized fluids are likely to have travelled through and precipitated out of. It’s these structures that one often finds ore grade gold material at/around.

Westhaven hit such a structure during its last drill program that finished in late 2017. As part of that drill program, Westhaven drill tested a northeast trending linear magnetic (mag) low anomaly with 2 holes. This mag low had only just been generated as part of a ground geophysics in the summer of 2017. Both holes hit gold mineralization, and confirmed that this structure is what they’ve been looking for all along. After this drill program finished, Westhaven completed more ground magnetics which has extended the strike of this structure now to excess of 1,500 meters. The current drill program is focused on drill testing this recently discovered gold-bearing vein system/structure.

Westhaven shares have oscillated within a fairly tight range for the last couple of years, meanwhile insiders have continued to be steady buyers on the open market:

At its recent share price of C$.14 and ~65 million shares outstanding, WHN has a C$9 million market cap. At a sub-C$10 million valuation, the market isn’t giving WHN much credit for the potential of an economic resource discovery. That could all change with Westhaven’s next two drill programs; never before has the Westhaven team felt they were so close to finding the feeder structures/zones for the gold at Fraser River, which sent tens of thousands of people running to British Columbia in the late 1850s. Moreover, a discovery of economic grade & width is likely to be handsomely rewarded by the market given the attractive locations of the Westhaven projects (road access, close proximity to rail and energy infrastructure).

Westhaven is on the brink of what could be a transformative year in terms of beginning the process of proving up the company’s Spences Bridge Gold Belt projects. Perhaps the best part is that given the company’s fairly modest market valuation.  If Westhaven has exploration success on any of its three main projects, the share price is likely to appreciate exponentially. Westhaven shares are priced attractively for investors willing to roll the dice on exploration success alongside a management team with a proven track record who are more than willing to put their money where their mouths are.

The article is for informational purposes only and is neither a solicitation for the purchase of securities nor an offer of securities. Readers of the article are expressly cautioned to seek the advice of a registered investment advisor and other professional advisors, as applicable, regarding the appropriateness of investing in any securities or any investment strategies, including those discussed above. Westhaven Ventures Inc. is a high-risk venture stock and not suitable for most investors. Consult Westhaven Ventures Inc.’s SEDAR profile for important risk disclosures.