Global electric vehicle sales are on the verge of launching into a parabolic curve during the next decade: And lithium is projected to be in short supply just as demand skyrockets! In fact by 2025 global lithium demand is projected to outstrip all existing production in addition to projected greenfield development: Without new sources of lithium supply coming online over the next several years the surging global demand could cause the price of lithium to rally to many multiples of current levels. Lithium is the key to the clean energy revolution of the 2020s and investors who shrewdly position ahead of the coming lithium boom could reap huge gains. As Tesla and other electric vehicle (EV) manufacturers such as Ford, General Motors, and Porsche rapidly accelerate EV production plans North American sources of lithium are in high demand; Canada accounted for negligible lithium production in 2015 and the US only accounted for 2.6% of global lithium production.

Nevada’s Clayton Valley accounts for 100% of US lithium production currently with Albemarle’s (NYSE: ALB) Silver Peak Mine representing the only producing lithium asset in the United States. The Clayton Valley received even more attention in September 2015 when Tesla signed a lithium supply agreement with Canadian based junior Pure Energy Minerals, the first of its kind for Tesla.

The Clayton Valley has received increasing attention over the last couple of years as the lithium sector has soared more than 100% since Pure Energy announced the potential lithium supply agreement with Tesla: 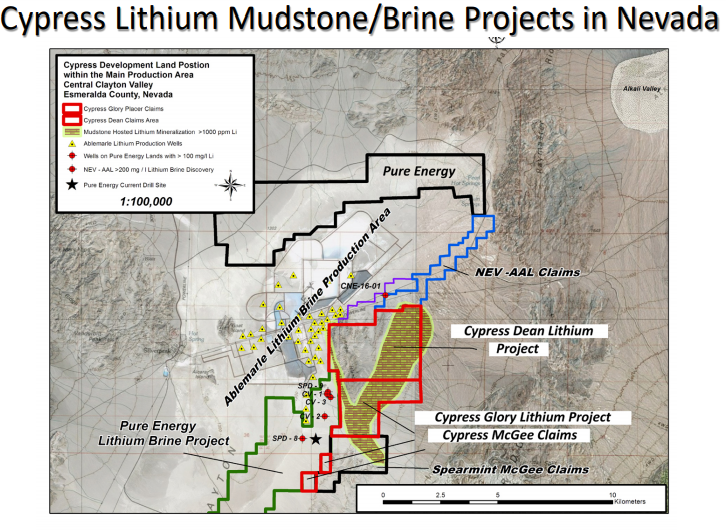 Cypress’ Dean and Glory Projects are distinct from Albemarle’s Silver Lake lithium brine project in that Dean and Glory are 100% claystone (mudstone) projects. In decades past lithium was not thought to be economically extractable from mudstone, especially because most mudstone has the presence of hectorite (a mineral which makes the lithium difficult to extract). However, the Dean and Glory projects are not challenged by the presence of hectorite and recent advancements in lithium extraction technology make Cypress optimistic that it may have economically viable lithium projects in one of the best locations on the planet (200 miles from Tesla’s Gigafactory).

Cypress has just completed a C$1.4 million round of financing and has embarked upon an aggressive multi-pronged program which includes a leach test program in conjunction with SGS Lakefield in order to determine how the material extracts using simple reagents such as sulfufic acid, ammonium sulfate, and water. In addition, Cypress is conducting a 15 hole drill program at Dean (9 holes) and Glory (6 holes) reaching approximately 400 feet depth on each hole using diamond split-tube drilling.

The primary purpose of the current exploration/metallurgical program is to determine whether the lithium is extractable in economically viable commercial quantities. Once this determination has been made Cypress can move forward with a mineral resource estimate which could be released by Q4 2018.

In its 2017 phase 1 exploratory program all 9 holes drilled on the Dean Property intersected strong lithium mineralization and 8 samples from Dean averaged over 2000 ppm lithium including 3,730 ppm lithium: 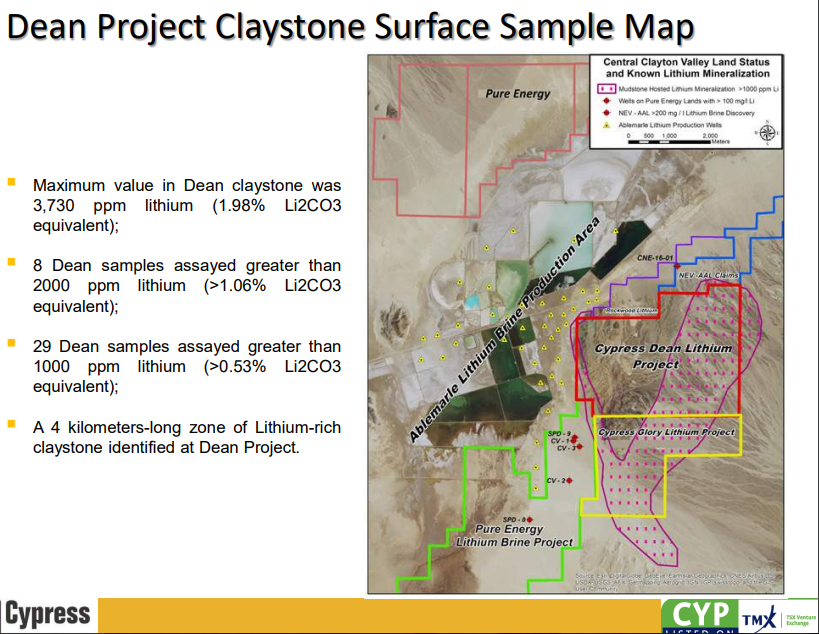 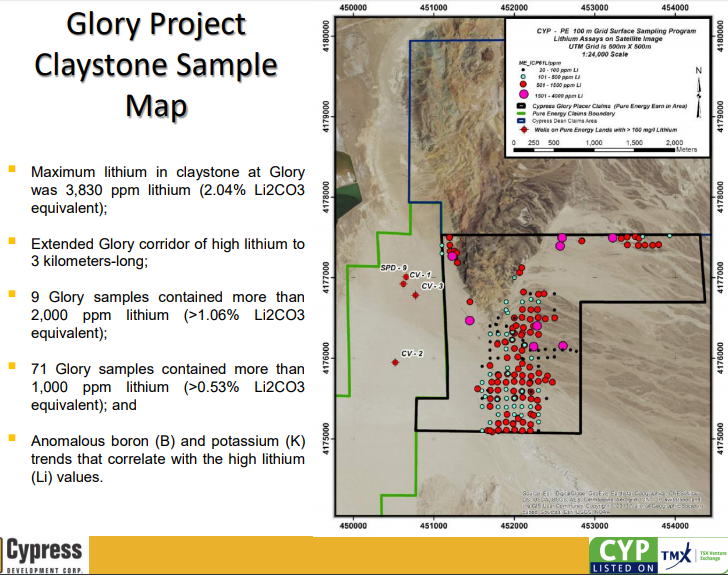 So far the Clayton Valley mudstones are proving to be different from other mudstone projects in terms of carbonate content and acid consumption. Cypress’ current leach testing program combined with phase 2 exploration drilling could go a long way towards advancing the Dean & Glory Projects to being economic producing lithium assets in the best lithium jurisdiction on the planet.

The article is for informational purposes only and is neither a solicitation for the purchase of securities nor an offer of securities. Readers of the article are expressly cautioned to seek the advice of a registered investment advisor and other professional advisors, as applicable, regarding the appropriateness of investing in any securities or any investment strategies, including those discussed above. Cypress Development Corp is a high-risk venture stock and not suitable for most investors.. Consult Cypress Development Corp’s SEDAR profile for important risk disclosures.