With 2016 marking a major reawakening of the gold bull market, gold assets in safe jurisdictions are back in high demand and the scramble to replace reserves among senior producers appears set to reach a frenetic pace. As we have been pointing out for the last couple of months the big gains during the next stage of this bull market cycle will come from mid-tier takeover targets and/or junior explorers who make significant discoveries in attractive jurisdictions. Our search for gold juniors with quality gold assets that could become attractive acquisition targets has brought Genesis Metals Corp. (TSX-V: GIS) onto our radar.

Genesis has an impressive veteran management team that includes former Placer Dome Senior Management Brian Groves (CEO with over 30 years of experience in Australian and Canadian mining & exploration), and Adrian Fleming (Executive Director, Mr. Fleming was VP Exploration for Placer Dome Sydney, Miramar Mining and Golden Star Resources and has played an instrumental role throughout his career in advancing multiple major gold discoveries that have became mines). Also Robert McLeod (Genesis Chairman, President & CEO IDM Mining and was a key member in the discovery of the 1.6 million ounce White Gold deposit in the Yukon that was subsequently sold to Kinross for $140 million). These are guys who have a track record of exploration success with the majors and juniors spanning over decades, and who know how to move a project forward to production or a takeover decision.

Genesis’ primary focus, the Chevrier Gold Deposit in Quebec, is fairly unique in that a significant amount of drilling was done on the property decades ago which all indicate impressive gold mineralization over a fairly wide area. However, previous gold bear markets have prevented the project from advancing.

Chevrier is 100% owned by Genesis and has a main zone with 300,000 ounces grading 1.99 grams/tonne gold. Genesis also couldn’t be more excited about Chevrier’s exploration potential, both along the main zone which is open at depth and to the north. Genesis also recently discovered that 53 holes that were drilled by Minnova in the early 1990’s were not included in the 2010 43-101-resource estimate. Updating this 43-101 report is a major priority for Genesis in 2017.

Another aspect Chevrier has going for it is its proximity to excellent infrastructure with well-maintained roads and a power lines on both sides of the property. The town of Chibougamau is about 35km from Chevrier and this mining camp has seen total gold production of approximately 7 million ounces.

Chevrier is located in an exploration intensive area of Quebec near projects controlled by major gold producers such as IAMGOLD: 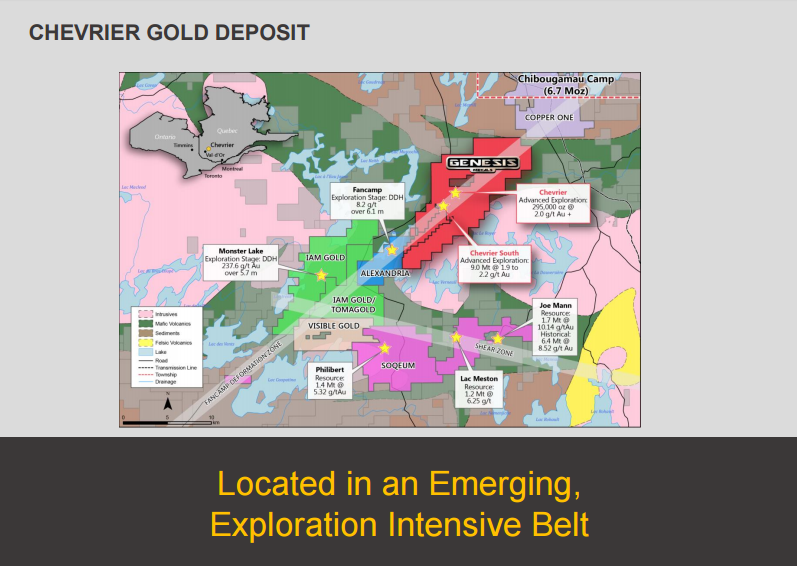 We had the opportunity to connect with Genesis CEO Brian Groves to hear the full Genesis story and the company’s plans for advancing Chevrier.

CEO Brian Groves offered the following synopsis of Genesis’ plans for the rest of 2016 at Chevrier:

“The gold potential of Chevrier has been known for about 40-50 years. It’s been explored by both junior and senior exploration companies. Probably the most extensive exploration involved a company named Minnova. Minnova conducted extensive drilling on the property and we have access to some of their core within the approximately 70,000+ metres of drill core at our disposal. We plan to take specific sections of core from those existing holes, re-assay them and re-log them. We will then look and see if there is a material difference between the new assays and the older assays”.

The company announced that trenching is underway and they will complete three historical and three new trenches.  “In some of the previously trenched areas we have seen promising grades and hope to confirm some of those historical results. So we will look for some clear targets that we can move to a drill phase.

We also plan to compile all data for the entire 96 square km project and identify new target areas. After we complete the surface program we will be planning a major drill program to commence early in 2017”. 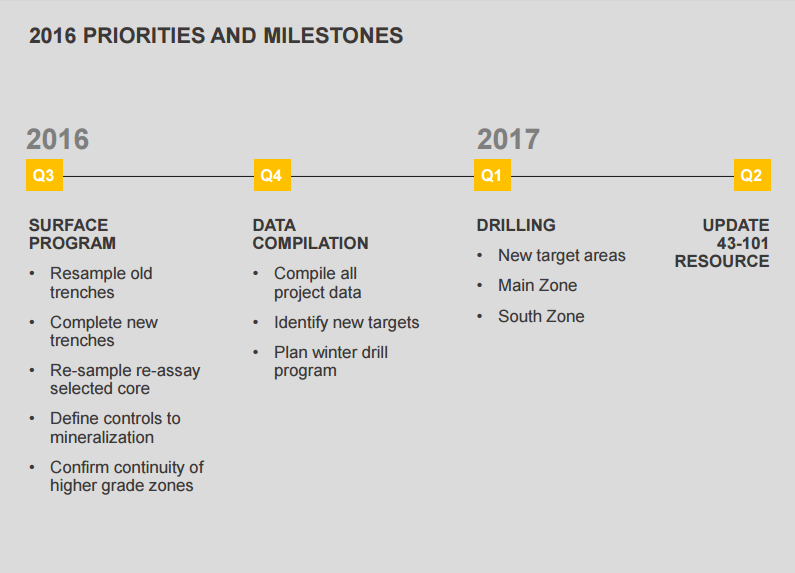 The Genesis story is simple and compelling. A top notch management team with extensive exploration experience (150+ years combined) and a proven track record of finding large economic resources have come together with a commitment to explore and advance a highly prospective gold project in one of the best mining jurisdictions in the world. A drill program scheduled to begin in January will have the clear aim of proving out some of the previous drilling that has been done on the Chevrier Property and prepare for an eventual new 43-101 compliant resource estimate.

The company is fully funded through the end of the year and with a modest C$10 million market cap investors could be rewarded handsomely in the event the Genesis team is able to further delineate an economic gold resource and/or make an exploration discovery at Chevrier. We look forward to news flow from Genesis over the coming months and will keep readers apprised of new developments. Strong accumulation during the last couple of months as GIS shares have settled in a range between C$.20 and C$.28.

The article is for informational purposes only and is neither a solicitation for the purchase of securities nor an offer of securities. Readers of the article are expressly cautioned to seek the advice of a registered investment advisor and other professional advisors, as applicable, regarding the appropriateness of investing in any securities or any investment strategies, including those discussed above. Genesis Metals (TSX-V:GIS) is a high-risk venture stock and not suitable for most investors.. Consult Genesis Metal’s SEDAR profile for important risk disclosures.