Vancouver, British Columbia–(Newsfile Corp. – October 7, 2019) – Blackrock Gold Corp. (TSXV: BRC) (“Blackrock” or the “Company”) is pleased to report that drilling has commenced at its Silver Cloud property, a low-sulphidation epithermal gold and silver project located along the established Northern Nevada Rift gold trend in north-central Nevada. Silver Cloud lays directly adjacent to Hecla’s Hollister Mine and is a former Teck and Placer Dome project where limited drilling between 2000 and 2003 yielded multiple high-grade intercepts at both the Silver Cloud mine and Northwest Canyon targets.

The fully-financed initial program will consist of up to 2,000m of core drilling, with four holes planned to follow up on past high-grade intercepts reported by Teck (including 158g/t Au over 1.5m) and by Placer Dome (5.5g/t Au over 12m). Geologic modeling developed by Blackrock’s team suggests that the historic high-grade precious metal intercepts may be associated with an east-west vein system rather than the north-south system that guided previous interpretations. This initial core drill program is designed to test the east-west interpretation over a 2km strike, with drill sites at each end aimed at targeting the Main vein and a sub-parallel hanging wall vein at a 1,500m elevation.

Andrew Pollard, President & CEO stated “Our geologic interpretation suggests that a low sulphidation epithermal, east-west oriented, precious metal vein system runs between the Silver Cloud mercury mine and Northwest Canyon, located 2km directly to the west. The initial drilling program is designed to target precisely where Teck and Placer Dome intersected high-grade gold. With the availability of new data, we are re-orienting the drills, turning them by 90 degrees, which will allow us to test the east-west extent of the vein system. If our model holds true, we should intersect the Main vein and a sub-parallel hanging wall at both ends, which would represent roughly 2km of strike on one of the highest-grade gold belts on the planet.”

Leapfrog modeling of historic drill holes using logged lithology and gold assay data show potential for five veins within the Silver Cloud vein zone. Past drill intercepts within 200m of the 1,500m elevation reported by previous operators have gold values ranging between 3 g/t Au and 158 g/t Au and, as such, Blackrock has designed its drill program around that preferred elevation. Up to 10,000m of drilling among five sites throughout the Silver Cloud vein zone has been permitted and bonded which would allow Blackrock to expand the initial drill campaign decisively should early results warrant.

The Silver Cloud geologic model and initial drill program are outlined in a YouTube presentation by Bill Howald, Executive Chairman, and can be viewed at: Silver Cloud Geologic Model in Leapfrog 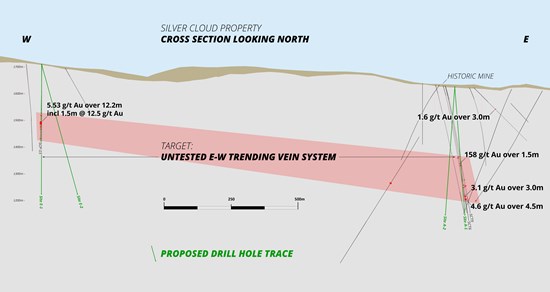 Blackrock is a junior gold-focused exploration company that is on a quest to make an economic discovery. Anchored by a seasoned Board, the Company is focused on its Silver Cloud property, a low-sulphidation epithermal gold & silver project located along the established Northern Nevada Rift gold trend in north-central Nevada.

To view the source version of this press release, please visit https://www.newsfilecorp.com/release/48521