Aben Resources: Sprinting Out Of The Gate In The Golden Triangle

The Golden Triangle Region of British Columbia is one of the most prolific gold bearing regions in the entire world. This region has hosted significant mineral deposits including Pretium (Brucejack), Eskay Creek, Snip, Galore Creek, Copper Canyon, Schaft Creek, KSM, Granduc, and Red Chris. Last year, a new high-grade gold discovery by a company named GT Gold (TSX-V:GTT) caught the market’s attention and sent the share prices of many junior explorers with projects in the Golden Triangle soaring. Another Golden Triangle explorer, Colorado Resources (TSX-V:CXO), stoked the market’s excitement with a discovery at its KSP Property that included a bonanza grade gold intercept.

Due to weather conditions during the winter, drilling in the Golden Triangle usually begins in May and wraps up by early October each year. The drilling limitations create a seasonal pattern in Golden Triangle exploration stocks. There is typically a rally that begins in May/June, as investors load up in anticipation of the summer drill programs and the release of drill results (which can start to trickle out as early as July). There is also a tendency to ‘sell the news’ once drill results come out in the 4th quarter, and very often these stocks can continue to trickle lower during the first few months of the following year.

Shares of Golden Triangle explorer Aben Resources (TSX-V:ABN) have followed this seasonal pattern for the last two years with 300%-400% rallies (peaking in August 2016 and September 2017) before experiencing a round trip during the last couple of months of each year:

This year, Aben has sprinted out of the gate at its Forrest Kerr Gold Project in the Golden Triangle by completing a C$2.32 million financing last month with plans to have a drill crew on site by the first week of June. By starting its drill program early, Aben seeks to get ahead of the crowd sending cores to labs for assaying – last year, a surge in companies seeking assays for exploration programs, in addition to relatively low lab processing capacity, created problematic delays for many companies. This is unlikely to happen this year, as the labs have expanded capacity and companies have sought to begin drilling programs earlier, which should avoid a bottleneck.

Aben’s Forrest Kerr Project is literally right in the middle of the Golden Triangle, less than 30 kilometers north-west of the Eskay Creek Mine that produced approximately 3.3 million ounces of gold and 160 million ounces of silver at average grades of 45 g/t gold and 2,224 g/t silver.

One of the things that sets Aben apart from the pack is its exceptional management team, which includes Chairman Ron Netolitzky, who was part of the team that discovered Eskay Creek. Mr. Netolitzky has a track record of success, which includes several major gold discoveries and companies that were acquired by larger mining companies. He was also inducted into the Canadian Mining Hall of Fame in 2015. Aben has assembled a team of experts who understand the geology of the Golden Triangle better than any, including Tim Termuende, Cornell McDowell, Henry Awmack, and Michael Roberts.

Aben’s Forrest Kerr claim package encompasses in excess of 23,000 hectares, which consists of a 40 km long north-south belt overlying rocks of the Hazelton and Stuhini Groups, a complex assemblage of volcanic accumulations with intervening sedimentary sequences which are host to significant gold deposits in the Golden Triangle. Forrest Kerr has had multiple high-grade gold drill intercepts dating back to the early 1990s, however, due to high drilling costs/limited accessibility, historic glacier coverage, and a less comprehensive understanding of the geology, these results were not aggressively pursued.

Aben’s technical team has spent more than a year analyzing and reinterpreting the historical exploration and geological data with the help of structural geologists, in order to gain a better understanding of the existing targets and high grade gold mineralization at the project. Moreover, major improvements to infrastructure in the area have tremendously lowered exploration costs and made the Forrest Kerr Project more accessible. Perhaps,  most exciting is the fact that glacial retreats during the last 25 years have exposed extensive new areas of outcrop exposure.

The 2018 exploration program will encompass 4,000-5,000 meters of drilling over 16-20 holes. Aben is especially excited about following up on last year’s high-grade intercepts at the Boundary Zone which included 33.4 g/t gold over 11 meters – the Boundary Zone has only been drill tested over a limited area, where high grade gold in quartz veins were intercepted. 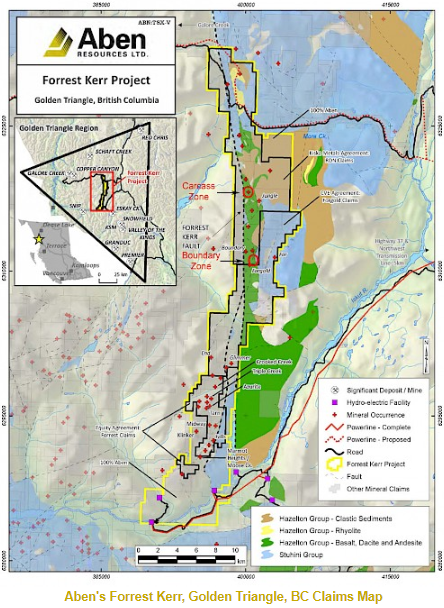 With 20 holes being drilled this summer, Aben is conducting its largest exploration program to date at Forrest Kerr. The primary aim of the program is to expand upon known zones of high grade mineralization at the Boundary Zone. If Aben is successful in expanding these zones of high grade mineralization, the payoff in ABN shares could be exponential (as the probability of Forrest Kerr becoming an economic gold resource increases tremendously). From an investor perspective, now could be the perfect time to get into ABN just before the herd gets excited about Golden Triangle exploration programs, and more importantly at C$.18 Aben has a C$11 million market cap which leaves substantial upside available in the event of exploration success this summer.

The article is for informational purposes only and is neither a solicitation for the purchase of securities nor an offer of securities. Readers of the article are expressly cautioned to seek the advice of a registered investment advisor and other professional advisors, as applicable, regarding the appropriateness of investing in any securities or any investment strategies, including those discussed above. Aben Resources Ltd. is a high-risk venture stock and not suitable for most investors. Consult Aben Resources Ltd’s SEDAR profile for important risk disclosures.