Vancouver, British Columbia–(Newsfile Corp. – August 25, 2020) –  Blackrock Gold Corp. (TSXV: BRC) (the “Company“) is pleased to provide an update on its maiden drill program at the 100% controlled Tonopah West project located in the Walker Lane trend of Western Nevada, and the Silver Cloud project located along the Northern Nevada Rift in north central Nevada.

A second drill rig (core) arrived at site on August 20th and will drill core tails from a series of RC pre-collars. The first core tail is complete and is a step-out hole from TW20-001 within the Victor Vein. The Company reported it had encountered multiple intersects including 29 metres of 965g/t AgEq, 3 metres of 2,198g/t AgEq (including 1.5 metres of 3,603 g/t AgEq), and 3 metres of 465g/t AgEq in drillhole TW20-001.

The core tail, TW20-011C, encountered alteration starting at approximately 500 metres which intensified downhole from argillic alteration to stockwork veining, veins and breccias. The most intense alteration occurred between 580 metres and 612 metres down the drillhole and contains vein zones with stock work zones of blue-gray colored clay seams. Alteration diminished at 640 metres after crossing a vein/fault structure where the drillhole encountered weakly altered andesite and was stopped (648 metres). TW20-011C intersected the Victor Vein gold-silver system 50 metres to the west-northwest of TW20-001. The core-tail drilling program, with five holes planned, will test approximately 300 metres of the Victor Vein gold and silver system.

Andrew Pollard, President & CEO commented, “The addition of a second drill rig and expansion of the program to 20,000 metres allows us to accelerate the discovery process and materially advance our understanding of the multiple targets that comprise Tonopah West in this maiden round of drilling. Utilizing the core drill rig allows us to test the down plunge extent of the Victor gold and silver vein zone beyond where holes TW20-001-002, and -003 left off, while the reverse circulation rig can simultaneously continue on discovery focused drilling and rapidly follow-up on exploration-success by delineating vein zones every 100 metres at other targets. Assays are pending from three target areas, and we’re excited to test the Ohio Vein target next.”

The RC drill rig has completed seventeen drillholes, with assays pending from the Victor Vein, DPB, and New Discovery targets, in addition to three pre-collars at Victor for the core tail program at the Victor Vein target.

Drilling in the Denver, Paymaster and Bermuda target (DPB) is proceeding as planned. In-fill drilling along the Paymaster and Denver veins is in progress with drillholes being drilled on 100-metre centers along these two veins. 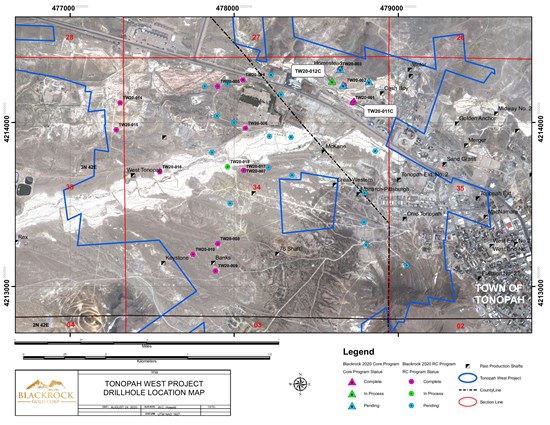 At the Company’s 100% controlled Silver Cloud project, located on the prolific Northern Nevada Rift in Northern Nevada, a detailed mapping and sampling program has been completed, and drill permits have been submitted to the Bureau of Land Management for an envisioned 3,500-metre drill program focused on the NE Veins and Quiver targets. Permit approvals and bonding are anticipated by September. The Company has secured a RC drill rig which will arrive on site in mid-September.

An Induced Polarization (IP) survey has been initiated and preliminary data is showing success and defining additional areas for follow up. It is anticipated that additional high-priority drill targets may be added to the fall drilling program.

This news release contains “forward-looking statements” within the meaning of Canadian securities legislation. Such forward-looking statements concern the Company’s strategic plans, timing and expectations for the Company’s exploration and drilling programs, estimates of mineralization from drilling, geological information projected from sampling results and the potential quantities and grades of the target zones. Such forward-looking statements or information are based on a number of assumptions, which may prove to be incorrect. Assumptions have been made regarding, among other things: conditions in general economic and financial markets; accuracy of assay results; geological interpretations from drilling results, timing and amount of capital expenditures; performance of available laboratory and other related services; future operating costs; and the historical basis for current estimates of potential quantities and grades of target zones. The actual results could differ materially from those anticipated in these forward-looking statements as a result of the risk factors including: the timing and content of work programs; results of exploration activities and development of mineral properties; the interpretation and uncertainties of drilling results and other geological data; receipt, maintenance and security of permits and mineral property titles; environmental and other regulatory risks; project costs overruns or unanticipated costs and expenses; availability of funds; failure to delineate potential quantities and grades of the target zones based on historical data, and general market and industry conditions. Forward-looking statements are based on the expectations and opinions of the Company’s management on the date the statements are made. The assumptions used in the preparation of such statements, although considered reasonable at the time of preparation, may prove to be imprecise and, as such, readers are cautioned not to place undue reliance on these forward-looking statements, which speak only as of the date the statements were made. The Company undertakes no obligation to update or revise any forward-looking statements included in this news release if these beliefs, estimates and opinions or other circumstances should change, except as otherwise required by applicable law.

To view the source version of this press release, please visit https://www.newsfilecorp.com/release/62435